A company that reclaims oil refinery waste may be required to identify the pollutants it wants to dump into the Intracoastal Waterway in West Baton Rouge Parish after the Supreme Court declined this week to hear an appeal from a lower court.

The Intracoastal supplies drinking water to 10,000 people in nearby Iberville Parish and additional businesses. It ultimately flows into the Atchafalaya Basin and Lake Palourde.

Thermaldyne LLC has been operating since April 2019 without an industrial wastewater discharge permit, though it has key permits for other operations. In January, the 1st Circuit Court of Appeal ordered the Louisiana Department of Environmental Quality to force the company to provide a “full listing of pollutants” before state regulators can consider authorizing discharges into the waterway.

The appeals court upheld a March 2019 order from 19th Judicial District Judge William Morvant ordering DEQ to get the list from Thermaldyne.

An attorney for the environmental group that sued over the permit said Friday that the Supreme Court decision was a “victory for common sense.”

In Thermaldyne’s permit request, which was made before the plant started operations, the company had sought a waiver from having to identify the contents of the water releases, which the company said would be treated to safety standards.

Greg Langley, spokesman for DEQ, said on Friday he could not comment on the ruling, citing the agency’s policy on speaking about pending litigation.

“We’re just looking at the ruling to see what impact it will have,” Langley said. 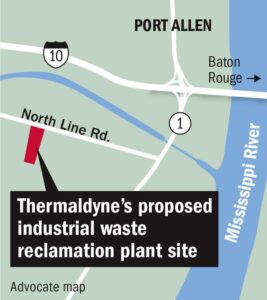 A spokeswoman for Thermaldyne referred questions to the company’s chief operating officer, who couldn’t be reached by telephone at the company’s offices on Friday. When the 1st Circuit ruled in January, a company spokesman said it wouldn’t “have an impact on current day-to-day operations.”

The Supreme Court issued its 4-2 ruling denying review of the appellate decision on Monday.