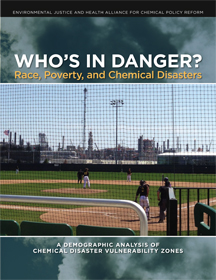 An explosion and fire at the Chevron refinery in Richmond, CA caused 15,000 people to seek medical treatment in August 2012.

An explosion at a fertilizer facility in West, TX killed fifteen people — including local firefighters — and levelled an entire neighborhood in April 2013..

Which community will be next? The U.S. experiences several serious chemical release incidents each week. Yet no national law requires industrial facilities to seek safer alternatives to even the most dangerous chemicals.

More than 134 million Americans live in the danger zones around 3,433 facilities in several common industries that store or use highly hazardous chemicals. But who are the people that live daily with the ever-present threat of a chemical disaster?

A new report from the Environmental Justice and Health Alliance for Chemical Policy Reform (co-sponsored by Coming Clean and the Center for Effective Government) answers that question.

Who’s in Danger? A Demographic Analysis of Chemical Disaster Vulnerability Zones presents new research showing that residents of chemical facility “vulnerability zones” are disproportionately African American or Latino, have higher rates of poverty than the U.S. as a whole, and have lower housing values, incomes, and education levels than the national average. The disproportionate or unequal danger is sharply magnified in the “fenceline” areas nearest the facilities.

Action to prevent chemical disasters is needed now — workers, communities, businesses, and governments face severe potential costs to life, health, and finances from chemical hazards that are often unnecessary. Despite the fact that the U.S. experiences several serious toxic chemical releases every week, federal policies do not require companies to fully assess whether the chemicals they use or store could be replaced with safer alternatives. This report recommends policy solutions that can safeguard millions of Americans from potential harm in and around hazardous chemical facilities.