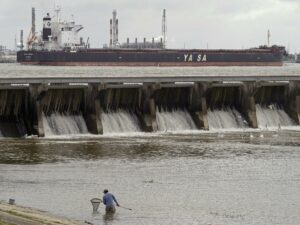 Liz Reinhardt Delsa was driving home from the airport on the Lake Pontchartrain Causeway on June 16 when she heard what she thought was heavy rain hitting her windshield.

But instead of sliding off as water droplets normally do, the rain seemed to stick. That’s when she realized: “It was bugs,” she said.

A swarm of midges, also known as “blind mosquitoes,” was hitting her car like pellets. The bugs’ population has exploded in a way that Delsa, a lifelong resident of southeastern Louisiana, has never seen in her 42 years.