Even as Hilcorp Energy Co. works to clean up a spill of as much as 4,200 gallons of oil in the Plaquemines Parish marsh, the company is the target of a new lawsuit alleging it smothered oyster leases in the same area when it dug access channels to one of its Barataria Bay wells. Oyster growers say the Houston-based company used a process called “prop washing,” in which tugboat propellers churn the waterbottoms to deepen existing channels.

“Unfortunately, Hilcorp prefers the cheapest solution, to prop-wash, and refuses the available alternatives, contributing to a ‘death by a thousand cuts’ to Louisiana’s coast,” says suit, filed in June in U.S. District Court in New Orleans by the Louisiana Oystermen Association. Hilcorp officials did not respond to a request for comment on the suit. On Monday, U.S. District Judge Jane Triche Milazzo agreed to the company’s request for another 20 days to respond to the suit.

Hilcorp hired a contractor Monday to clean up oil that leaked from its abandoned flow line in the Lake Washington oil field area in Plaquemines. The Coast Guard, which has estimated the leak at as much as 4,200 gallons, said Friday (July 29) that contractors had recovered 375 gallons of oily water mixture and 250 bags of soiled sorbent material.

The oyster growers’ suit is the latest environmental challenge in court to oil and gas operations along Louisiana’s coastline. Hilcorp is also a defendant in several “legacy lawsuits” filed by parishes trying to get oil companies to restore damages from historic operations, including the dredging of canals and disposal of wastes decades ago.

One of those suits was filed Thursday on behalf of Vermilion Parish by District Attorney Keith Stutes. “The message is simple: Clean up the mess that you have made and restore our coast to its original condition,” Stutes said.

The Louisiana Oil and Gas Association, which counts many of the defendants among its members, repeated its opposition to legacy lawsuits. It said the lawsuits are not needed, the state Department of Natural Resources already is regulating their operations and the oil and gas industry already partners with the state in a variety of coastal restoration efforts.

In the oyster growers’ suit, however, the plaintiffs make clear they are not targeting legacy operations, but rather the contemporary methods used by Hilcorp to reach and operate its oil wells. The suit also marks an escalation by the oyster growers in their legal challenges of oil industry actions, after major damage to their harvests resulting from Louisiana’s use of freshwater diversions to block oil from entering wetlands during the BP oil disaster in 2010.

The suit says Hilcorp did not have required permits from the U.S. Army Corps of Engineers or state Department of Natural Resources when it used prop washing in January to move a large drilling barge in place to “recomplete” its E. Cockrell Jr. 154 well near the shore of Lake Grand Ecaille, west of Empire.

That placed the company in violation of the federal Clean Water Act’s prohibition against dredging and filling in open waters without considering alternative, less-damaging methods, or mitigating the damages, the suit contends. The Clean Water Act lets individuals sue in federal court to enforce its provisions, after first providing a 90-day notice to the alleged violator. The oyster growers’ group said it asked the company to halt the prop-washing in January and also notified corps and state officials of Hilcorp’s work.

On. Jan. 28, five tugs hired by Hilcorp “pushed and pulled” the drilling barge from just south of Jean Lafitte to a location a mile south of the well site, where it became stuck and had to be “wheel washed,” another name for prop washing, off that location. Then, says the Louisiana Oystermen Association’s suit, the ships prop washed a channel from an existing channel to the well site through an area called the Northern Reach.

Waterbottoms leased by the state and private landowners to oyster growers are prepared for oyster farming by laying down a layer of hard shell and rock “cultch.” Once that layer is in place, growers deposit seed oysters on the cultch, and the oysters take about three years to mature.

The suit contends that the tug propellers stir up bottom sediments, turning parts of the water bottom into goo. “A great deal of the sediment churned up by the propeller is suspended in the water column and is dispersed by the tide and force of the propeller over large distances,” the suit says. “This sediment settles over time, and renders the bottom soft and muddy and more susceptible to tidal scouring.”

More important, prop washing leaves the bottom too soft for cultch to be laid down without sinking into the sediment, making it either unusable or requiring use of much more of the material. And sediment stirred into the water settles onto the oysters, smothering them.

The lawsuit says the mile-long area that was prop-washed had been only 5 to 7 feet deep, while the drilling barge had a draft of about 8 feet. It cites a brochure outlining specifications by barge owner Baywater Drilling Co. of Houma. Oyster growers videotaped and photographed the prop washing, wheel washing and other unpermitted dredging, the suit said.

On Feb. 5, the state Department of Natural Resource investigated the drilling site. “It appears that the average depth in the area was approximately 6 feet while within the opening, the depths were closer to 8.5 feet. This indicates that a prop-washing ‘cut’ of bottom material may have occurred,” says a portion of the department’s investigation report quoted in the lawsuit. The suit says neither the federal government nor the state government cited the company, although the company has not tried to repair the damage.

The suit asks that Hilcorp’s actions be declared to have violated the Clean Water Act, and that it be fined. That could cost the company as much as $37,000 a day. The suit also asks the court to order Hilcorp to restore the waterbottom and forbid future violations.

According to the suit, this is not the first time Hilcorp failed to comply with the Clean Water Act’s dredging provisions. The U.S. Environmental Protection Agency has brought four compliance actions against the company for similar violations during the past 10 years, and the state Department of Natural Resources’ Office of Conservation, which oversees drilling operations, has an 18-page list of warnings, violations and compliance citations, including several civil fines, the suit says.

Included are several similar allegations of unpermitted dredging of waterbottoms or unpermitted destruction of marsh during drilling operations, the suit says. In one case in 1983, Hilcorp was fined $87,000 after it first said it wouldn’t need a permit to dredge because it would use only barges with drafts no deeper than 4 feet. State officials concluded the company actually destroyed more than 1 3/4 acres of wetlands near three wells.

On July 14, Hilcorp Alaska agreed to pay $100,000 to the Environmental Protection Agency to settle rules violations involving a February 2015 spill of almost 10,000 gallons of crude oil and produced water onto 40,000 square feet of arctic tundra and gravel pad. That spill resulted from a leak in the bottom of a pipeline.

After the latest spill in Barataria Bay, state and federal officials said about eight square miles of the bay, including wetlands, was contaminated with oil. Environmental Safety and Health, a cleanup contractor hired by Hilcorp, deployed sorbent boom and had workers mopping up oil with absorbent pads.

Photos of the cleanup operation — taken Tuesday by the Gulf Restoration Network Vanishing Earth and the law firm of Waltzer Wiygul & Garside, which represents the oystermen association — showed cleanup workers pumping water from the bay and spraying it on oily deposits in wetlands to break up the material.

The Coast Guard said the cleanup contractor had deployed about 3,000 feet of hard containment boom to prevent spoiling unaffected areas, and that aerial surveys were to continue by both Hilcorp and the Coast Guard. The cause of the spill is still under investigation.

An official with the Louisiana oil spill coordinator’s office said Thursday it was too soon to determine whether the amount of spilled oil would trigger a provision of the federal Oil Pollution Act requiring state and federal officials and the company to conduct a natural resources damage assessment. Such a review would determine the value of lost resources and come up with a plan to replace or restore them.

The article can be found on the Times Picayune’s website, nola.com at the following link.

The below photo from the Times Picayune article that reported the spill that can be found at this link shows:

Two Environmental Safety and Health vessels deploy boom on Monday, July 26, to help corral an estimated 4,200 gallons of crude oil near Lake Grande Ecaille in Barataria Bay. Hilcorp Energy hired the company to clean up the spill, which came from an abandoned oil flow line. 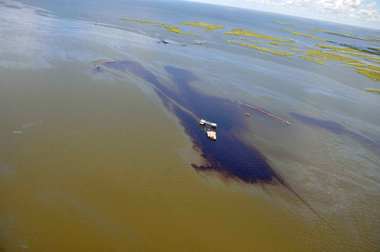