It is our sad reality that wells and pipelines seem to spill oil in Louisiana every few months.  Many of you have asked what can be done, particularly in Hilcorp’s December  spill in Lake Grand Ecaille. We spoke about the problem of proving where the oil went and what damage it would cause, and promised to look for ways to track these spills.    To keep that promise, Cathy Norman and Joel Waltzer (Gen. DeGaulle office) attended the Gulf of Mexico Oil Spill & Ecosystem Science Conference in early February in New Orleans. We learned about the latest science devoted to oil spills, spill response, oil tracking, and the unfortunate effects oil has on our marine life and environment.  And we met the scientists who actually are doing this great work. 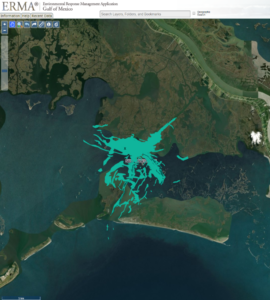 Perhaps the best panel discussed NOAA’s expanded use of satellites to track the oil over time, information NOAA now posts the to its ERMA website, like the December Hilcorp spill shown here.  Now, we can see whether oil was on or very near specific oyster leases and shorelines.  That is a big change.  Call us if you want to know whether the oil spill (shown in blue) contacted your lease or property.