On August 16, 2018, the Louisiana Department of Wildlife and Fisheries (LDW&F) quietly approved and executed an agreement with the Grand Isle Levee District to construct, operate and manage a new airport located on a narrow strip of land near Grande Isle. The airport plan, to be constructed on the Elmer’s Island property owned by the LDW&F, included redevelopment of an old airstrip, development of an airport hangar, aircraft ramp and tie down, fuel tanks and an area for a terminal building. Once this somewhat clandestine plan, which was supported not only by local government but also the Governor’s office, was made public, outcry from conservation groups and scientists was overwhelming.

The plan touted economic, recreational and public safety benefits, but was initiated without public input. The Management Plan for the Elmer’s Island Wildlife Refuge and Elmer’s Island Management Area, dated 12/15/16, clearly states that the refuge provides critical habitat for the piping plover and that its creation was purposed with protecting endangered and threatened species. Airports and birds clearly don’t mix. 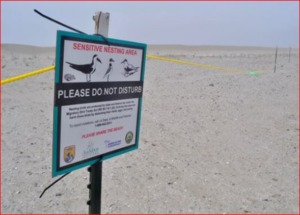 Additionally, the State had just spent millions of dollars to restore the area as part of the Caminada Headlands Restoration Project. Post project Elmer’s Island became one of the largest tern nesting colonies on the Gulf Coast.