By May 9, 2019, the U.S. Army Corps of Engineers had been in a flood fight in Louisiana for nearly 200 days. Officials gathered every morning in a conference room in New Orleans that was—perhaps thankfully—windowless, keeping their opponent out of view: just below the office snarled the overladen Mississippi River, more than 8 million gallons of water ripping past each second.

That morning, the team discussed the latest forecasts and notes from inspectors, who were assessing every foot of every levee every day. They were dealing not with a river, really, but with the Mississippi River & Tributaries Project: the web of canals and spouts the lower Mississippi has become, with floodgates that can be opened or closed to redirect the water on command. The New Orleans team had been focused on the Bonnet Carré Spillway, which diverts water from the Mississippi into Lake Pontchartrain, connected to the Gulf of Mexico, during floods.

Whether to open a spillway can be an agonizing decision. When the Bonnet Carré is activated, the rush of fresh water can decimate the Gulf’s saltwater ecosystems and seafood industry. Another spillway, the Morganza Floodway, has been used so infrequently (only twice since it was built in 1954) that many people farm within its boundaries. When the Army Corps considered opening it earlier this year, ranchers scrambled to move their cattle out of harm’s way. 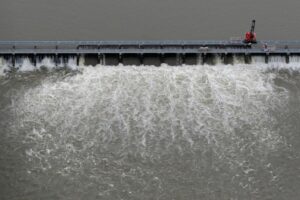 Workers open bays of the Bonnet Carre Spillway, to divert rising water from the Mississippi River to Lake Pontchartrain, upriver from New Orleans, in Norco, La., Friday, May 10, 2019. Torrential rains in Louisiana brought such a rapid rise on the river that the Army Corps of Engineers is opening the major spillway four days earlier than planned. Spokesman Ricky Boyett says the river rose 6 inches in 24 hours, with more rain expected through the weekend. (AP Photo/Gerald Herbert)Over its first 80 years in operation, the Bonnet Carré spillway was activated just 10 times. Then something changed. The river hit the trigger point in 2011, 2016, 2018 and—for the first time ever in back-to-back years—February this year. Economists calculated that the opening in 2011 cost the Mississippi economy $58 million over the next few years, largely due to the reduced oyster harvest. But when the trigger point is hit, the Corps is legally bound to open the spillway, but recently, rising waters have forced the issue before it’s required.

On May 9, the leaders of the Corps’ New Orleans district announced that the river was rising again and that in five days they would reopen Bonnet Carré. “It’s a bit extraordinary,” the Corps’ emergency operations manager told the press. For the first time in history, the spillway would be operated twice in one year.

Then came the rain.

That night, so much poured over Louisiana that the river rose 6 in. Soon it would hit 17.5 ft., higher than the city had seen in more than 40 years. For Corps officials, that was too close to the tops of the levees, which sit around 20 ft. At the next morning’s meeting, they decided to open the spillway that day, immediately. Within hours a crane began to pluck wooden pins out of the spillway’s gates. The water came roaring out, the collected runoff from a flooded continent.

More trouble was on the way. Hurricane season was incipient. A storm hitting while the river was already this swollen is the stuff of nightmares; the Corps had already nearly exhausted its water diversion options. When Hurricane Barry brushed past the city in July and delivered little damage, it was both a relief and a warning shot, a reminder of what’s almost certainly to come: a flood that could sink a nation.