In early 2013, a U.S. District Court approved two plea agreements resolving certain criminal cases against BP and Transocean, which arose from the 2010 Deepwater Horizon explosion and oil spill. The agreements directed a total of $2.544 billion to the National Fish and Wildlife Foundation (NFWF) to fund projects benefiting the natural resources of the Gulf Coast that were impacted by the spill. In Louisiana, this settlement mandated that these funds be dedicated to “create or restore barrier islands of the coast of Louisiana and/or to implement river diversion projects on the Mississippi, and/or Atchafalaya River for the purpose of creating, preserving and restoring coastal habitat”. The chart below shows how the Louisiana funding is to be allocated: 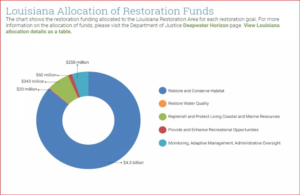 To date NFWF has awarded more than $625 million for 13 projects in Louisiana. The largest project, the $251 million dollar Caminada Headlands Restoration Project restored 13 miles of barrier shoreline that protects Port Fourchon and important habitat for nesting shorebirds and migratory birds.

Additional restoration projects that have been funded and completed include barrier island habitat restoration on Shell Island (680 acres) and on Chenier Ronquille  (500 acres). Additionally, the Lake Hermitage Marsh Creation project, restored 104 acres of brackish marsh in Plaquemines Parish. The restoration of 1000 acres of wetland habitat on Whiskey Island in Terrebonne Parish is near completion and work is ongoing on a $13,200,00 project for the placement of oyster cultch onto approximately 1420 acres of public oyster seed grounds.

The infusion of these funds has been critical to jumpstarting the ongoing effort to address Louisiana’s critical wetland loss. Because many of these projects were already at various stages of planning and engineering, execution of the projects was fast tracked. Ongoing oversite of future restoration plans and projects and the expenditure of these critical funds is critical to the future of the State of Louisiana.

Make your voice heard by attending the next CPRA Coastal Connections meeting Tuesday March 19th, 4:30pm at the Buras Auditorium, 35619 Hwy. 11, Buras, LA. Keep in the loop on the restoration each month with upcoming meetings by checking the calendar at http://coastal.la.gov/calendar.